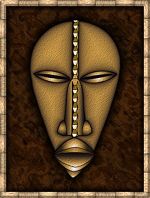 Lesson of the Mask

Joseph Campbell, who in my view was the world’s greatest comparative mythologist, wrote a book about the role of masks in ancient ceremonies (The Masks of God: Primitive Mythology). He was interested in the experiences of people who participated in sacred rituals where a performer wore a mask which portrayed her or him as a deity. The people at the ceremony often knew the identity of the person wearing the mask, it may have been–for example–their uncle, so what did they believe about the person when he was wearing the mask in the ceremony? Did they believe that in the ceremony the mask actually transformed him into the deity or did they see him as representing the deity in a metaphorical sort of way?

Campbell argues that the people at these ancient ceremonies did not take either perspective. Those who believe that the mask transforms the person into a deity, the true believers–and this would include those who believe that their mythology is literally true–do not belong at the ceremony. On the other hand the spoil-sports, the skeptics for whom the mask has no power to transform its wearer into a deity, for whom the ritual must–at best–represent a metaphorical transformation, are also not invited. The statues of guardians–warriors, dragons, demons–who flank the entranceways into the ancient ceremonial sites are there to keep out what today we might call the ‘religious mind’ as well as the ‘scientific mind’. The people at these ancient ceremonies, Campbell believed, took a third option, experiencing the ritual as neither literally true nor essentially metaphorical. This third option involves moving out of the realm of logic and immersing oneself completely into the realm of the play, the realm of ‘as if’.

The anthropologist Gregory Bateson (who I think was one of the greatest minds of the 20th Century) had something similar to say.

“[In the 1500’s] in Europe, many Catholics and Protestants were burning each other at the stake, or were willing to be burned, rather than compromise about the nature of the bread and wine used in the Mass. The Catholics said that the bread is the body of Christ and the wine is the blood, the Protestants said, on the other hand, that the bread stands for the body of Christ and the wine stands for the blood. The point is not to say that one side is better than the other, but that the argument is one of fundamental importance in understanding the nature of the sacred and human nature…Now it is my suspicion that the richest use of the word ‘sacred’ is that use which will say that what matters is the combination of the two, getting the two together. And that any fracturing of the two is anti-sacred. The Catholics and the Protestants were equally anti-sacred. The bread both is and stands for the body.” (A Sacred Unity: Further Steps to an Ecology of Mind)

Bateson goes on to say that the path to the sacred, to getting to the place where the bread both is and stands for something, involves leaving what he labels ‘prose thinking’ (and that I label as ‘the intellect’) and entering into ‘dream thinking’, for in dreams our experiences are not labelled as true or false, or as literal or metaphorical.

What both Campbell and Bateson are talking about, I believe, is ‘intent’ (please see the post ‘Intent‘).

Photo of the Dan mask courtesy of the ArtyFactory.