I would like to share an email I just sent out to my psychology department.  While I have, in previous posts, said what I have said below, I wanted to share with you how I approach academia about the Andean Cosmovision.   Oakley

Hi, I am retiring from the department at the end of this academic year. It is, for me, the end of an era. My father was a dean at the University of Utah and a member of our psychology department. I earned my Ph.D. here in Experimental Psychology. After graduating I moved to a teaching university and eventually became a full professor with tenure. I then resigned and moved back to Salt Lake and became an adjunct professor for our department. My wife resumed her career and I took on the role of being the at-home parent for our sons. This arrangement has worked out really well for me and I would like to thank you all for your support which made this possible.

What drew me into psychology in the first place was my interest in humanistic psychology and the psychology of consciousness. I have had the freedom, time, and resources after returning here to continue my research into these interests, which eventually led me into studying the worldview of the indigenous people of the high Andes of Peru. I have traveled to Peru, if my reckoning is correct, seventeen times, and I have subsequently shared the results of my work in a blog, in a book, in papers at academic conferences, in presentations to the university community, and in several hundred experiential workshops and classes.

As I contemplate ending my participation in our department I find that there are a couple of things I would like to share with you. I am not engaged in any of your lines of research, so I do not have any information that I can impart that would be relevant to that. What I would like to share is more along the lines of wisdom. Being an elder in a community, at least in some societies, has the perk of being listened to when wisdom is offered, but only if the elder doesn’t over do it. I will be brief.

I want to talk about worldviews. I have, over the years, immersed myself into the traditional worldview of the indigenous people who live in isolated villages in the high Andes of Peru. What I have found has been richly rewarding in my pursuit of exploring the full potential of being human (humanistic psychology) and in my interest in the nature of consciousness. I may be unique in this department in having those interests. What I would like to share, however, concerns a much wider context that includes all of us who participate in the valuable endeavor of science.

I use the term worldview to refer to how the individuals in a culture experience and interact with reality. The Western definition of worldview refers to a culture’s set of concepts and beliefs about the nature of reality. Defining worldviews in terms of underlying concepts and beliefs, however, is a very Western way of looking at things, it applies to the Western worldview but not necessarily to others. The Andean worldview, for example, cannot be described in terms of concepts and beliefs. This brings me to the first piece of wisdom I would like to share, which is that other worldviews cannot be understood from the perspective of our Western worldview, for they are qualitatively different than our own. When we interpret other worldviews through our own worldview than rather than looking through a window at another way of experiencing reality we are, instead, looking into a mirror, and nothing new shines through.

A relevant question is why would we care about other worldviews? This is my answer. Every worldview is based upon a set of assumptions about the basic nature of reality. These assumptions, which are rarely brought to awareness to be examined (because they are assumed to be true), make it easy for a society to excel at some things at the price of making it difficult for the society to excel at other things. This is an inevitable tradeoff.

The Western worldview makes it easy for us to excel at inventing new technology and at gathering information about the world. We are incredibly good at this, look at our technology, look at the expansion of our information about the nature of reality. This same worldview makes it difficult, however, for us to actually experience, and deeply care about, our interconnectedness with life on this planet. Destroying the planet seems like the default trajectory of our society, and it is taking a huge effort to try to change that. Western society, as a result, is in a car speeding toward the cliff, while we sit in the back seat playing with and arguing over our test tubes and toys. When we sail off the edge of the cliff it will be too late to do anything about it, and we will take much of what is beautiful about our planet with us.

The Andean worldview is based upon a very different set of assumptions about reality. These assumptions provide a fundamentally different way of experiencing and interacting with reality. The Andean worldview is particularly good at giving people the experience of being part of nature, living in harmony with nature, and caring about its wellbeing. This worldview, however, has its inevitable limitations. I doubt, for example, that if the Inca empire had not been destroyed by the Spanish that they would have yet gotten around to inventing the internal combustion engine.

If the only worldview we know is our Western worldview then we automatically view other cultures through that perspective. In the Western way of viewing things the Andean culture is seen as a primitive, lesser, version of our own. Look at how how few technological advancements they have made. Look at how little they know about atoms, blackholes, cells, transistors; that vast ocean of knowledge that we scientists are doubling every few years. The Andean worldview, however, is not a primitive version of our own worldview, it is instead a qualitatively different worldview. It is a worldview that in addition to being mindbogglingly interesting offers a way to steer the car away from the cliff. This will not require that we abandon our Western worldview, we can still be scientists, but scientists in a world that is worth living in.

This is what I have been working on. I don’t want our society to destroy the beauty of this planet (particularly not with my help). I also don’t want to give up all of the great things we have accomplished in Western society, and I don’t want to stop the process of science. This seems, however, to be our choice if we are to select one worldview over the other. There is another alternative, an integration of the two, and this is what I have been pursuing these past many years.

On first blush, the idea of integrating two worldview seems logically impossible, for each worldview is built upon a different set of assumptions about the basic nature of reality. The solution I am pursuing can be understood in terms of Lord Alfred North Whitehead and Bertrand Russel’s theory of logical types (Principia Mathematica, 1910-1913). This can be summarized as follows. If we have two different views of reality, two different worldviews, then their integration does not have to involve mashing the two together. It should be possible, instead, to arrive at a meta-worldview that contains those two worldviews while maintaining their distinctions. In the perspective of logical types this meta-worldview exists at a higher logical level than the worldviews it encompasses, and the contradictory assumptions of the worldviews are no longer a problem. This meta-worldview provides a stance where we can maintain our love of science while steering the car way from the edge of the cliff. I have personally found it to be a perspective where the reasons of my heart come into harmony with the reasons of my reason.

This, then, is the second and final piece of wisdom I would like to share. If we want to head toward a future of greater beauty and health for this planet we need not abandon our Western worldview (we will need it) but instead we may need to move up a logical level to a perspective that encompasses both the Western worldview and other worldviews.

It is easy to frame the value of this endeavor in terms of the compelling image of our society speeding toward the cliff.   What brought me into this in the first place, and that continues to be a fundamental part of it, however, is the way it nourishes me personally. Immersing myself in the Andean worldview, and then working on integrating it with the Western worldview, had to happen within myself first. Experiencing reality, and my identity within that reality, from another worldview has been about as an enriching an experience for someone interested in the full potential of being human, and in the psychology of consciousness, as I could possibly have imagined, or planned. I do love to talk about all of this, and if you would like to chat over a cup of coffee or in some other context, before or after I retire, please let me know.

As for my retirement. It is not the end of my exploration, I simply will be spending less time and energy teaching statistics. My intent, to paraphrase the mythologist Martin Shaw, is to leave the village to explore the forest.

Blossoming to the Cosmos

Here is my favorite new meditation, from Américo and Gayle Yábar’s workshop here in Salt Lake earlier this month.

These Andean meditations are so simple and yet they can have such a profound and beautiful effect.  I recommend that you do this every morning for a couple of weeks (it only takes a minute), so that you begin the day with this energy, and see what effect it has on you.  Remember that the only meaning of these meditations is the effect they have on you.  If you like the effect you can add this meditation to your daily dance with the Cosmos.

Below is the group photo from the workshop, it was a very special time together, wonderful waikis!  Click on the photo if you’d like to enlarge it. 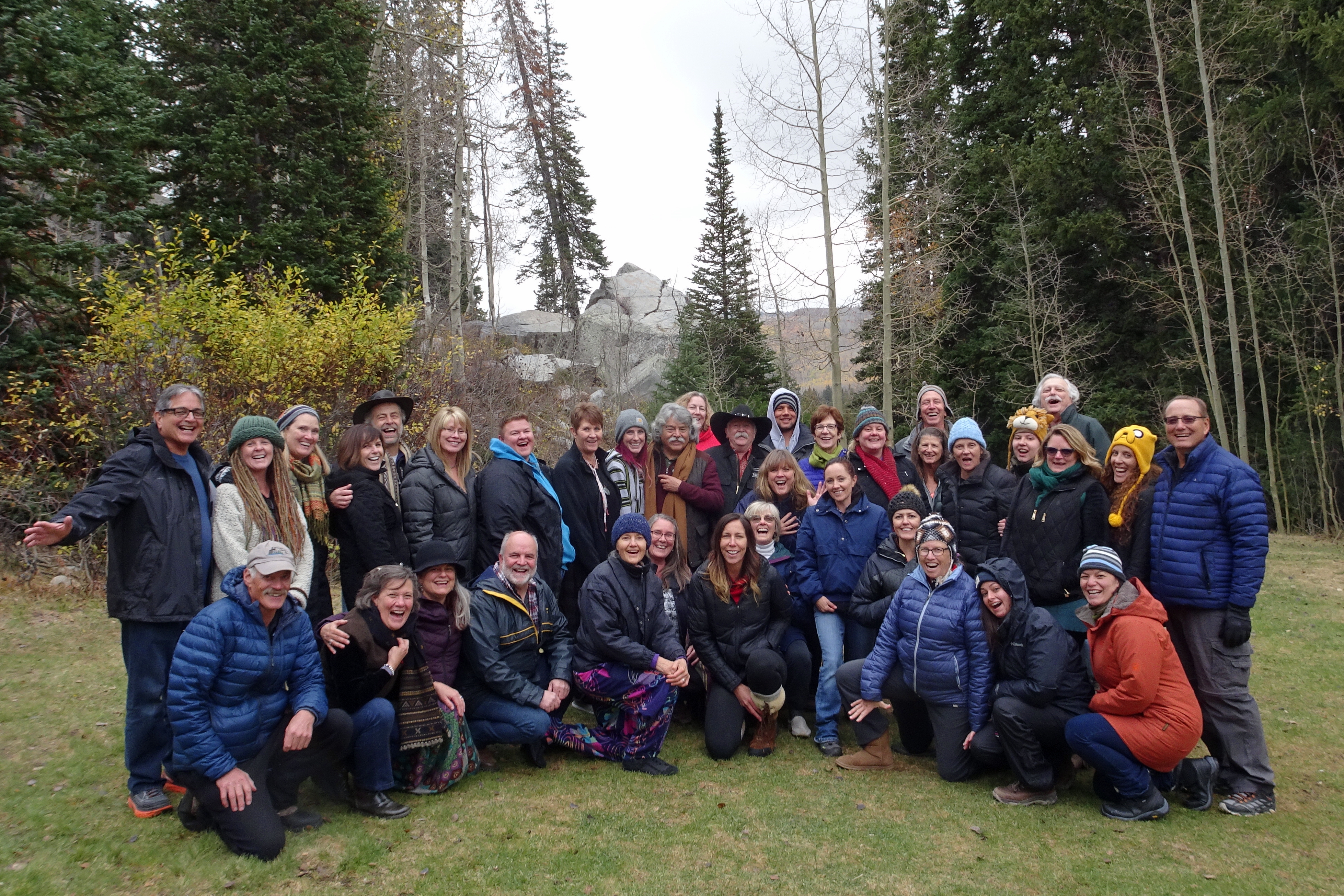