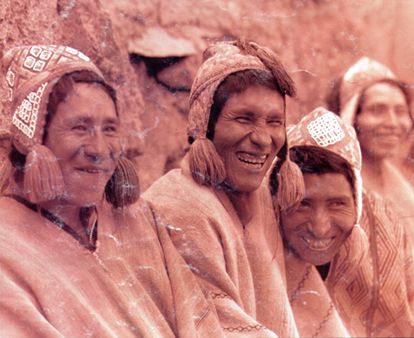 My work in the Peru has been with the paqos who live in the high Andes. The term “paqo” (sometimes spelled “paq’o”) does not have an exact equivalent in our culture, some people translate it as “shaman” and others as “mystic”.  It is not a particularly great choice, it is like trying to describe a bear to someone who has never seen one and having to choose between saying that it is somewhat like a large cat, or that it is somewhat like a large dog. 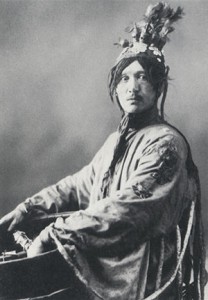 The word  “shaman” comes from an indigenous culture of Siberia where it refers to people who have special powers and a correspondingly special role in their society.  The term has since been adopted by our culture and applied to people with similar roles and powers in cultures across the globe.  While this has diluted the meaning of the term somewhat still there are basic elements to being a shaman.  Shamans typically enter into altered states of consciousness through the use of  psychoactive plants, drumming, or chanting.  While in these states they may journey into spirit realms not normally accessible in everyday life, and there they gather needed information or take actions to heal people whose afflictions have their root in these spirit realms.   The role of the shaman in society centers around their ability to perform these special actions.

Mystics, on the other hand, are those who seek to know, through direct experience, the essential nature of the Cosmos.  Thoughts, concepts, and to some degree perception, are interpretations of reality, not reality itself.  The experience, for example, that we are separate entities moving through time is a product of our mind, it is our experience of reality after the mind has translated it into something that makes sense, it is not the essential ‘suchness’ of reality itself.  When we experience reality before our mind has had chance to interpret it we find an eternal, seamless whole, we find the Sacred.  This place of deep knowing is the goal of the mystic.  The various outcomes we may ask a shaman to accomplish may no longer be of importance once we take a stance beyond our mind-based ego and its needs, thus a possible distinction between a shaman and a mystic is that of power versus wisdom. 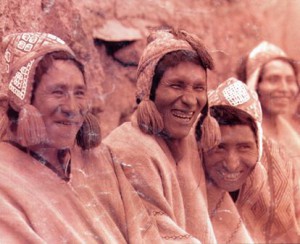 Paqos have some of the attributes of both shamans and mystics. The paqos are mystics in that they nourish an interactive and mutually supportive relationship with the rest of the Cosmos, it is a relationship that is only possible through the direct, mystical, experience of the interconnectedness of all things.  While it is this relationship that is paramount, the relationship does make it possible to ask favors from the Apus (the great spiritual beings who are the majestic mountain peaks) and from the Pachamama (the great spiritual being who is our mother earth) as well as others, and it allows for the manipulation of the energy that underlies all existence.

Paqos differ from traditional mystics, however, for mystics tend to be solitary figures who may have found it necessary to withdraw from society to pursue their path.  To be a paqo is to be of service, both to the great beings of Nature and the Cosmos and to the community.  This service is always performed within the context of ayni, the Andean principle of reciprocity, where giving is  balanced by receiving , and receiving is balance by giving.

Like shamans, the paqos have abilities that fall outside the ken of our culture’s conceptions of reality.  These abilities, however, are not ‘powers’, they involve neither controlling nature nor being controlled by nature (neither mastery nor servitude).  They stem instead from having an experiential understanding of the essential nature of reality and from nourishing a mutually supportive and loving relationship with the rest of the Cosmos.

Paqos are not exactly shamans or mystics, or they are both.  If forced to choose (to avoid long explanations) I usually go with ‘mystic’, and thus I label what I am studying as ‘Andean Mysticism’ rather than ‘Andean Shamanism’.  Few people would know what I meant if I called it ‘Andean Paqoism’ and I am reluctant to be held responsible for introducing a term like ‘paqoism’ into our vocabulary.

There is one thing I would like to add before bringing this to a close.  One of the more engaging and fulfilling aspects of studying a new culture comes from entering a world unlike the one with which I am familiar.  If I insist (consciously or unconsciously) on fitting what I experience into the categories I have learned from my culture (e.g. categorizing paqos as either mystics or shamans) then I miss seeing what is really fresh and new about the culture, and instead of looking into a fascinating new world I end up simply seeing  a reflection of my own.  This is something that has arisen over and over again for me, finding that I have interpreted something about the Andean culture in terms of my own culture’s view of the world and have subsequently missed something of great interest and  beauty.  In what I write in this site I will try to help you learn from my mistakes.

The photo of the Andean paqos by Elaine Nichols is included with her permission.  I scanned it in from the back of my copy of a 17 year old issue of the journal Shaman’s Drum.  Unfortunately it looks like it is from the cover of a 17 year old journal.  This is a metaphor of what it is like for me when I paraphrase in my writings one of the Andean paqos with whom I have worked (primarily Americo Yabar).  I want to share something beautiful they have said and I’m afraid that in doing so I’ll add some cracks and discolorations that may be mistakenly attributed to them rather than to me where it belongs.  Still, I think facing that risk is better than not sharing something beautiful at all.

Barefoot in the Mountains