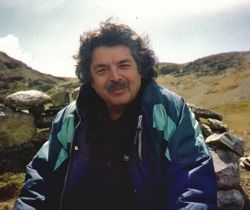 Don Americo Yabar (don Américo Yábar) is a mystic from the Andes of Peru. Since childhood he has been studying under and working with some of the greatest paqos (mystics/shamans) of the Andes. Having also received a college education in Europe he serves as a chakaruna, a human bridge of energy that connects the energy of the Andes with that of the West.

I first met don Americo in 1994 at a workshop in the deserts of Southern Utah. I subsequently went to several more of his workshops and then began to travel to Peru to study with him there. While I have been in Peru he has also arranged for me to work with other paqos and healers of the area, and in general has provided the opportunity for me to connect with the Andean people at a very heart-felt level.

There are some things I would like to share about Americo that reflect not only upon him but also, and perhaps more importantly, upon the basic qualities of the path that he exemplifies, the path that attracted me, that I am attempting to nourish with the Salka Wind site, and that perhaps is attractive to you as well. 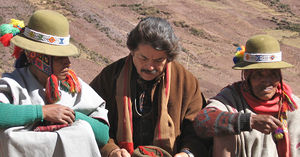 What has drawn me to associate with Americo is (among other things) his integrity, his love, and his joy of life. ‘Walking your talk’ is for me a minimum requirement for a path with a heart. Americo not only walks his talk, his walk is even more expressive and impressive than his talk (and as a mystic who is also a poet he talks very beautifully indeed). Anywhere I go with Americo in the Andes, from Cusco to the smallest village, people come running up with smiles, or lean out of a window and wave in delight to see Americo. Being with him is an instant ticket to having the opportunity to interact with the villagers at a heart-felt level, this is an opportunity I always embrace, and is an important part of the ineffable beauty and power of my experiences in Peru. While Americo is an impressive mystic in the traditional sense (whatever the hell that means) the path he walks shows up most profoundly in the way in which he interacts with the people of Peru, and does what he can to help them get by, and works to nourish their roots in their traditional culture.

For all of that, Americo is “just this guy, you know?” (description of Zaphod Beeblebrox, galatic president, in Douglas Adams’ Hitchhikers Guide to the Galaxy), not a Saint, not a guru, just a very human guy. I find this attractive about the path as well, as we travel it we don’t turn into Americo Yabar clones, we instead begin to blossom into who we uniquely are, we don’t rise above our humanity, we begin instead to express its true nature. 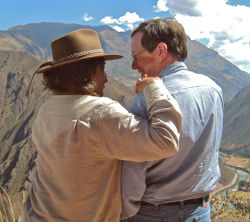 Don Americo and me in Peru